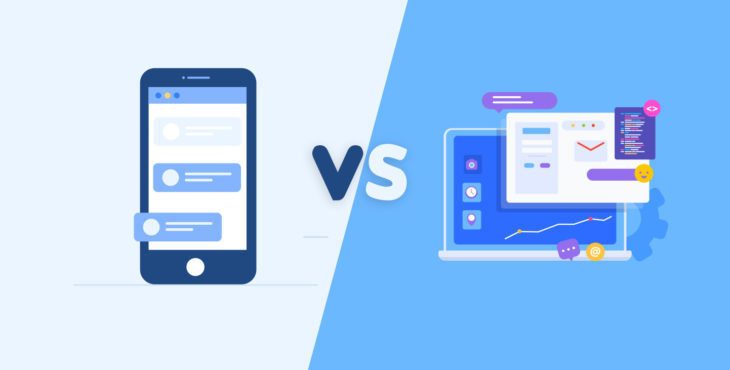 For someone who is just at the start of learning the development, the difference between mobile and web apps can seem small. However, there are a lot of different features for both apps. We decided to present all the important differences.

First, we will start with the definitions of both terms.

Mobile app or Native app is usually made for a specific mobile platform. To access the mobile app, you will have to download it directly on your device from the app store.

On the other hand, a web app doesn’t need to be downloaded as you can access it through the internet.

It’s important to mention the difference between a website and a web app, as the terms are not the same. Web apps you can use for both phone and desktop browsers. Web app represents a website that has a respond that is viewed on mobile devices.

To understand the distinctions between Mobile app and Web apps, we explain them at various points. Take a look.

Development of the apps

Before you decide whether you want to choose a mobile app or a web app development company, you need to determine what you want from them. Both of the apps have some distinct development process. When it comes to Native Mobile apps, you will have to know that the programming language is different for all platforms. To clarify, Java will be used for Android, and iPhone Switch will be the option.

On the other hand, web apps are using frameworks such as CSS3, HTML5, or JavaScript. First of all, you will have to decide what is your budget, and then bring a decision.

Mobile apps can be used with mobile hardware and with some other devices such as GPS, Camera, and others. It’s important to mention that the framework will update regularly; you will always be aware of new features.

Web apps can also update itself, but it can not access native features. However, it loads features from the web.

With the web apps, you will need constant internet access, and with mobile apps, some options can work offline. However, you will need the internet because of the updates.

The web app is a cheaper option to create it, but when it comes to maintenance, you will need more money. On the other hand, mobile apps are expensive, but they are also more efficient. The most important thing is to hire a fantastic mobile development company, and for that, you will need a lot of money.

The difference between the looks of the user-interface is not notable. When it comes to the native mobile app, UI takes care of platform and guidelines.

When we talk about the web app, we have to mention that UI is more flexible, which is an important feature because it is used for many devices. For example, it can be seen on a tablet, phone, or desktop.

As you can see from our text above, there are different features for both of the frameworks. It depends on your money and business, which one you will choose. If you have a huge budget, you can even decide to choose them both.

Now, we explained the most important differences between the two frameworks. However, we also need to explain how to develop them.

To develop mobile apps, you will need money and time because each platform has a different deployment process. Every time you start to create something, you will have to do it from the beginning. The mobile app is using Integrated Development Environment and specific languages. If you develop an Apple device, it will be used a Swift or Objective-C programming language. On the other hand, Android will use Java.

The process of developing web apps

For creating, web apps are using different web frameworks. Some of the most popular are CSS, JavaScript, and HTML5. It’s important to mention that web apps are cheaper, and they require less time. Interestingly, the web apps are not using the standard software development kit.

We hope that our article will be useful for you and that you will be able to bring the right decision.