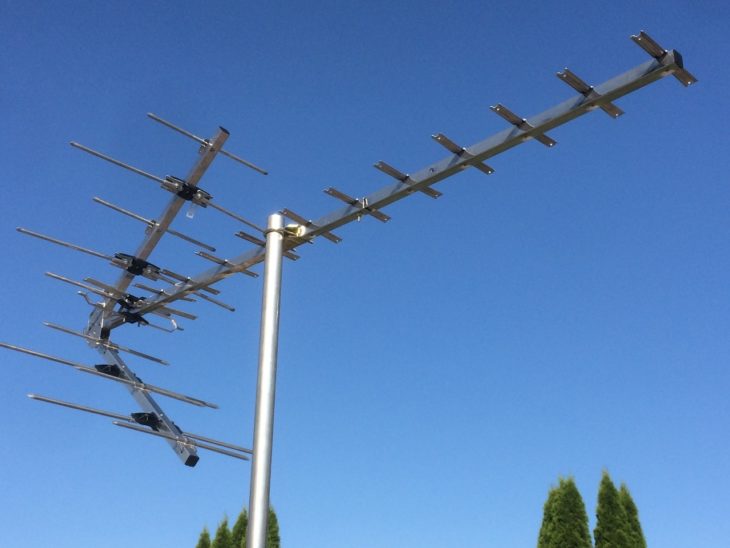 The benefits of watching TV through an antenna signal are unprecedented compared to other sources.

And while streaming services are becoming more and more accessible to the public, it’s the over-the-air broadcast TV service that is getting even more attention.

The option of having endless opportunities and the fact that this service is getting quite modernized are things that make it a hot commodity.

But, before we praise it too much, there is one very real problem with over-the-air broadcasting, and that is the issue of the signal.

There are quite a few things that can interfere with your signal. This, ultimately, results in poor image quality and can sometimes make it impossible to watch TV.

Some of the factors are if the broadcasting tower is located behind a large mountain, in a valley, if a forest is in the way and lots of other smaller things.

But there are ways to boost the signal coming from the receiver and eliminate all of these issues. In this article, we are going to give you five tips as to how to do that.

1. Get the Right Antenna

It goes without saying that not every antenna is built the same way. Some are high-quality, while others perform very badly. Because of that, the best tip we could give you is to carefully choose the right receiver for your needs.

But, saying that would negate the point of this article, so let’s get into greater detail.

There are two types of antennas out there. You have those that have receivers built for indoors and those for outdoor antennas. And you might think that outdoor ones would be better, since the higher you place it, the better the signal.

But this is actually far from the truth, as technology has had a thing to say about that. Nowadays, indoor antennas perform much better than outdoor ones. Not only that, but you also have the option of choosing the power of the unit.

Since all antennas receive the signal via the broadcasting tower, the receivers are manufactures with different pulling capabilities. As a general rule of thumb, you should always get an antenna with a receiver that has a range of over 20 miles.

Where you place the antenna can drastically put an end to this inconvenient problem. If you’ve already tried and are getting a crisp, clear image, then you shouldn’t move it.

However, if the image is of mixed quality, then you should try and move it around.

For indoor receivers, you have to find the perfect spot that has the least amount of interference. But how would you do that? Well, your best bet would be to point it towards the direction of the broadcasting tower and to place it next to a window. This way, the signal will reach the receiver with relatively easy.

For outdoor receivers, on the other hand, you might have to put in some work. First off, you will have to mount the antenna on the roof. This is probably the best option you have.

This might be a harder task than originally anticipated, so we suggest you hire experts to take care of the mounting. As your best option, we suggest you hire TV aerial installation experts. For more information about their service, you can click this link.

If one antenna isn’t enough to get the picture quality you want, then why not get multiple units? This option will be handy if you cannot find the perfect spot for your current receiver unit.

Getting multiple receivers and connecting them with each other will act as a sort of an amplifier for the signal to reach your TV screen better. This is a very popular method called antenna stacking and has been used for decades.

What’s the best thing about it? It has proven to be effective and works every single time. This method effectively boosts the signal and increases the pickup range of the receivers. It is a viable option if the broadcasting tower is too far from your home or if various objects are blocking it.

If you don’t want to mount two or three receivers on the top of your roof, then you might want to get an amplifier.

Amplifiers are exactly what they sound. These are gadgets that are effective in boosting the single coming from your antenna. What this does is make the unit more powerful than what it is.

It increases its pickup range, increases the signal range, and boosts the strength of the device itself. Amplifiers aren’t expensive at all and can be bought at your local hardware store.

However, most modern units come with their very own amplifiers, meaning you don’t even have to bother with this one. If you’re using an old antenna, then you should consider getting an amplifier or a completely new unit.

We touched briefly on why you should place your receiver towards the direction of the broadcasting tower, but let’s discuss it further.

A receiver will pick up the signal better if it is pointed towards the general direction where the signal should come from. After you install your antenna, the best way to approach this would be to plug it in your TV and turn it on.

Afterward, you can start turning the antenna in either direction until you notice a difference in the image quality. Pointing it towards the general direction will give you an image, but pointing it more accurately will solve your issue altogether.

This is a very important tip to have in mind if you’re experiencing poor image quality. Direction plays a key role in the receiver’s ability to translate the signal into the picture.

These were our five tips as to how to boost your TV antennas signal pickup range. We hope this guide has helped you solve your issue and has clarified a few things to have in mind when installing an antenna next time.