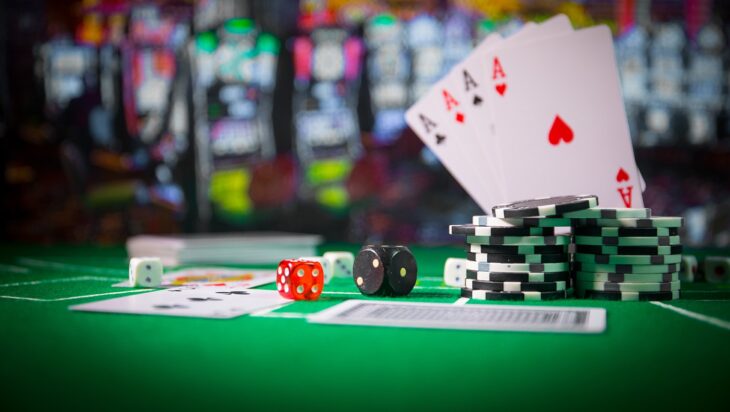 1. Slots, Aka Fruit Machines, Were Once Chewing Gum Dispensers

Ever wonder why so many slot machines obsessively use fruit symbols?

Well, this is because, for a time, way back in the year 1909, about fifteen years after they were invented, slot machines in San Francisco, and much of the US, were under heavy legal restriction following the placement of new gambling laws.

At the time, the popular “Operator’s Bell” slot machine, manufactured by the famous Mills Novelty Company, happened to also come with an in-built fruit flavoured chewing gum dispenser, as well as the familiar fruit symbols on its wheels. In order to circumvent the new laws, and continue to make money, owners of the Operator’s Bell began to convert their machines into regular chewing gum dispensers. This resulted in it being one of the only models still in use by the time new laws were passed and the restrictions were finally lifted, allowing slots owners to restore their machines back to normal operation.

The fruit symbols, by this time, had apparently become so popular that they stuck. Later, they began to be exported to England, where they were popularly dubbed “fruit machines”, and today, a century later, the fruit symbols, and name, are still in common use.

2. Four Of The Most Popular Casino Games Of Today Are Actually Quite Ancient

Did you know that four of the most popular casino games played today, namely craps, blackjack, roulette, and poker, are actually multiple centuries old?

The youngest of the four, at least in recorded history, is poker, which was first documented by English actor, Joseph Crowell, after witnessing it being played in New Orleans in the year 1829. His accounts describe it in exactly its modern form, though it had likely by this time already been passed down and played throughout many generations of immigrants and sailors. It’s actual age and origin is therefore unknown, though some have linked it to the very ancient Persian game of As-Nas, which somehow managed to find its way to North America during the early days of the US.

Next is roulette, whose origins date back to the early 18th century France, where it was named “little wheel” in the French language. The original form of the game had no numbers, and it was only later that it gained the numbers, system, and look that we know today, after being influenced by an Italian game called Biribi.

Blackjack, also known as Twenty One, has a very long, interesting, and well-documented history, and this famous casino card game goes way back to the beginning of 1600s when Spanish author Miguel de Cervantes first made reference to it. That makes it around four centuries old, and, like poker, that just refers to its first documented account.

The oldest by far though is Craps, which is historically believed to date back to the time of the Crusades in the 12th century, when a medieval prelate and chronicler named Sir William of Tyre invented it in Jerusalem in 1125 AD. Now that is old!

3. The Reason Clovers Are Clubs, And Pikes Are Spades, In Playing Cards

The variant of playing cards that is most commonly used around world today and at luckycreek.com is called the standard French deck. At various times during European history, though, a number of other decks were also in popular use.

The Germans had their own deck, with suits of Acorns, Leaves, Hearts, and Bells. And the English used a variant of the older Italian-Spanish suit, with suits of Swords, Cups, Coins, and Clubs. The French deck is comprised of Hearts, Diamonds, Pikes, And Clovers.

When the more popular French deck eventually become widely used throughout Europe and replaced the others, the English name of “Clubs” however, simply refused budge, despite the symbol on the corresponding French card being an obvious three-leafed clover, called Trèfle in French.

The Pikes of the French deck, on the other hand, which is meant to symbolise the head of an old French guard’s pike weapon, were first called Schuufle “shovel” by the Swiss and rural German folk of the time. This then became “Spades” when the name eventually reached England.

And to this day the names simply continue to remain Clubs and Spades.

4. The Nevada State Prison Once Had Its Own Casino

The gambling industry has apparently always been big in the US state of Nevada, so big in fact, that between the years 1932 and 1967, the Nevada state penitentiary, a notorious prison for its time, actually had its own casino.

In a stone-walled building called “the Bull Pen” on prison grounds, inmates were able to play games such as poker, blackjack, craps, gin rummy, and were even allowed to bet on sporting events using an in-house form of currency.

It was a apparently said to be a tight and well-run operation, and one that actually helped to keep prisoners in line and behaving. That is, unless anyone was caught cheating.

5. An Odd Moment In The History Of Las Vegas

Most people, when thinking of Las Vegas, think of the world-famous Strip at night with its bright lights, massive casinos, and busy streets scattered with tourists, gamblers, and drunken revellers.

In the 1920s, with a population of approximately 2300 people, Vegas was little more than a town out in the desert, with only one licensed casino amongst a number of illegal ones. It was a town that was booming, though, and also being partly funded by the US Energy Department, who were busy testing nuclear bombs approximately 65 miles to the northwest, at the famous Nevada Test Site.

Seeing it as tourist attraction, masses of tourists began to pour into Las Vegas to watch the spectacle of the mushroom clouds, despite being warned of potential health risks from radioactive fallout. In town they were known to have hosted events such as atomic bomb parties with atomic cocktail drinks, and even a “Miss Atomic Energy” beauty pageant where contestants donned sexy mushroom cloud outfits.

It’s said that over the course of 41 years, the federal US government detonated 921 nuclear warheads at the Nevada Test Site. It’s really no wonder Las Vegas glows so brightly.