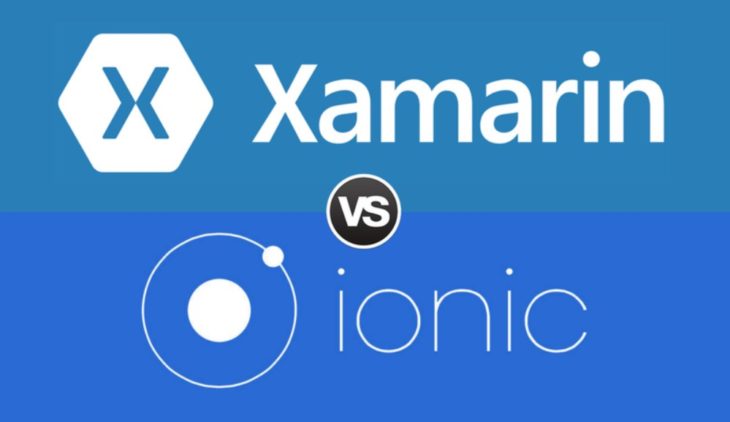 A lot of developers are not sure whether to choose Native mobile app development or Cross-platform app development. Both choices have a lot of features to offer, and that’s why the decision is even harder. While in the Native development, Java is present in the Android and Objective-C or Swift are in iOS. For the Cross-platform, you can choose between Xamarin and Ionic.

Both options will give great frameworks, so it depends on what are your needs. Xamarin has a long history as it used to be everyone’s favorite option. However, recently, more people are deciding to choose Ionic.

We decided to do research and to present to you the differences between Xamarin and Ionic. Read the text below and make the right decision.

Different approaches to Xamarin and Ionic

Before we present to you differences, we will explain how both platforms are working.

It’s important to mention that Microsoft is supporting Xamarin. Interestingly, Xamarin is using only one language, and it’s C#. Also, the native libraries and .NET sheets are used.

Ionic is using different technologies like HTML5, CSS, and JavaScript. However, the primary language is Typescript. Sass is used in writing the Ionic, and the center is AngularJS.

Xamarin’s and Ionic’s Performance and Code

JIT (Just-in-time) is used for Android and iOS AOT (Ahead-of-time). Interestingly, AOT can be used for both options.

There are a lot of different things about Xamarin’s and Ionic’s performance and code. To render application Ionic is using web technologies. However, Ionic is slow because it doesn’t use native components. It’s important to mention that Ionic is much better for testing, which is a great feature. For iOS and Android, Ionic is using JIT. To use JIT code is impossible for iOS, so Ionic is using WKWebView.

Interestingly, Ionic is using CSS and HTML5 and not fundamental parts. Besides, AngularJS and Cordova are also used.

Xamarin is a recommended framework if you want to make some important applications. It’s a great thing that you can easily connect an app to architecture or other applications. Besides, if you’re going to create apps that are using a native feature, then Xamarin is an option for you.

However, if you want to create some simple applications, then Ionic will be your choice. It’s easy to use it, and if you have some professionals to help you, then this framework is perfect for you.

From 2016, Xamarin is free for all the people who want to use it. Also, it is a part of the Visual Studio IDE. However, if you’re going to use a free version, then you should now that only five users are allowed. To avoid this issue, you will need a professional or enterprise license.

Same as with the Xamarin, with Ionic, you will also have the choice of the free and paid version. The basic version comes for free, but if you want a version that has three different packages, you will have to pay it. The prices are from $29 to $199 per month.

We presented to you all the essential features of the Xamarin and Ionic. To choose the right framework is entirely up to you, as it depends on what are your needs.

If you need stronger performance, then your option will be Xamarin. However, if you want to make some small apps and to pay less, then you will choice Ionic.

We hope that our article will be useful for you and that you will make the right choice.