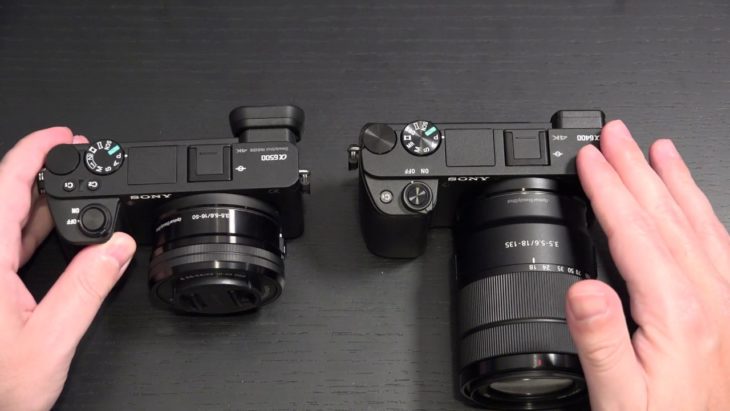 If you are looking for a proper camera that is not heavy and bulky, and that offers a variety of excellent features for an affordable price, Sony is a company that is known for such cameras. Today we are going to talk about two models – A6400 and A6500.

By the look of it, you will probably think that A6500 is a better option, but don’t judge too quickly. A6500 is an older model, and here are the differences between the two cameras that might interest you.

They are pretty the same in the overall look, but there are some differences. A6400 is thicker, and it has a flip-up screen. That can help you a lot, as you can see how your picture will look like when you press the shoot button. Some may think of how this is just another selfie camera, but that is not true. It can be beneficial for recording videos, as you can witness what is going to stay on your video while you record it.

When it comes to A6500, the screen is designed in such a way so you can move the angle of the screen in any direction that you want. Vlogging never seemed much more manageable with these two types of cameras and their display design.

Sony Alpha A6400 and A6500 are made out of plastic and magnesium alloy, and they have 0.39-inch OLED viewfinder that has 2.59-million-pixel resolution and 1.07 x magnification. In addition to being thicker, A6400 has another distinctive feature in its design. There is one custom key on the top plate, while A6500 has two.

Autofocus is very important. A6400 is better in that department, as Sony stated, mentioning A6400 as the “world’s fastest” when it comes to focus performance. They said how it takes 0.02 seconds, while A6500 needs 0.05.

It does require the perfect conditions to achieve that speed, but that doesn’t make it any less impressive. 425 points incorporate 84% of the frame, and they can be used to phase detect or to recognize contrast. Another better thing that A6400 offers is the object-tracking algorithm and eye-based tracking.

Another common thing that these two cameras have is the Bionz X feature and burst models. However, A6500 is more recommended if you want to capture stills, as the burst buffer is higher.

The difference is that A6500’s IBIS aids you in stabilizing footage, but A6400 doesn’t have IBIS. While it is suitable for vlogging, they both don’t have a jack for headphones, and plugging microphones can block your screen. Whatever you decided to get won’t be a bad investment, but be careful with recording videos.

Sony A6500 is an excellent camera for street photography, but it may lack in areas like portrait and landscape. A6400 is a better option for landscape photography, but depending on what you are needed the camera for, you can read in our article above what features these cameras possess.

A6500 is, in our opinion, a better option. Shooting stills is fantastic with this camera model, and recording videos is also better. People might think that is not that better due to the fact its an older model, but don’t let that confuse you. They both have their ups and downs, but as we mentioned earlier, A6500 might be a better camera to have.