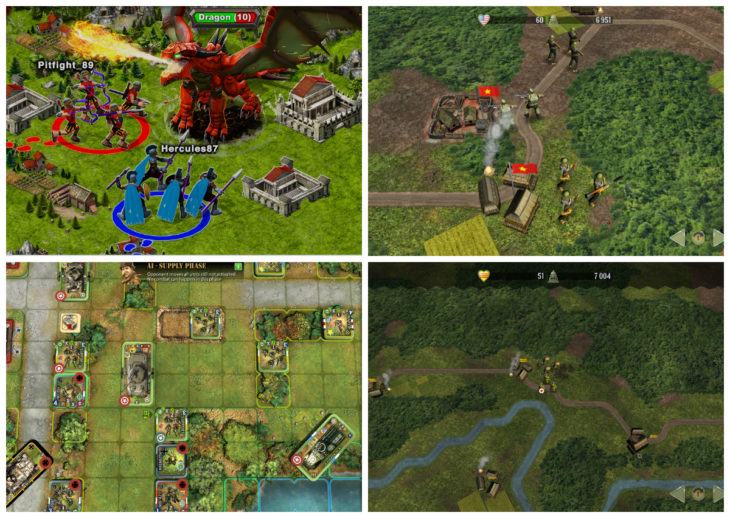 If you are like most of the people who play games, then you probably love to play the ones that include war. Sometimes, all of us need to play these kinds of games. On the market, you will find a lot of different offers for war games, but we did the research and found out which are the best ones. We have chosen exciting games, with a good plot and good quality.

We constituted a list of the 10 best iOS war games that you can play in 2022. Take a look.

The game is one of the sequels of the Ancient Battle games, and it represents an impressive war game. The game is connected to the Punic Wars, and you will fight Rome. Also, Hannibal is the central character who will be present in the whole game. The great thing is unusual geography, different characters and a lot of units. Also, there are a lot of campaigns available and a lot of hours to play.

The battle game is settled in the South Pacific, and the main topic is World War II. To win, you will have to find and attack the Japanese and beat them on the battlefield. In the battles, you can use more than 40 different weapons. Also, there are six scenarios, so you also have the choice of which one you want to play. There is a lot of in-app purchases, so if you wish, you can buy them.

Heroes of Normandie is one of the best war games that you can find on the market. The game is fun, modern and it will provide an excellent experience. The topic is not just war, but you will also need to use strategic moves so you can win on the battlefield. In the game, you have the role of the commander, and you will lead your team to victory. The great thing is that you can choose the way of playing, and even a multi-player is available. Choose your army from 4 options and bring them to the victory.

If you want to have fantastic war experience, you will get it through this game. Panzer Corps is vast, and it offers 800 units with a lot of different choices, and that means that you can explore through the whole game. To win, you will have to choose the right unit and the right strategy. Also, the great thing is that a lot of Nations are available such as Romania, Albania, Greece, the USA, Poland, and much more. You will have the possibility to purchase a lot of different scenarios and to play this game for a long time.

As the name of the game already says, the main topic is the Vietnam war. You will play the game as a commander, and the main goal is to win on the battlefield. Gunships and helicopters are available to help you in the battles. Also, special operations are included, and it’s a fact that Vietnam ’65 will provide fantastic fun for everyone who plays this game.

6. Wars Across the Worlds

Like any other war game, Wars Across the Worlds also has one main topic, and in this case, it’s a Normandy war. The game offers different scenarios, and you will have the possibility to choose in which one you want to play. For example, you have a choice between Bulge, Berlin, Waterloo, Hamilcar, or Saratoga. Also, more scenarios are included.

Your role in the game is a troops commander, and the task is to plan strategies to win. You will have to be careful about your strategy and to look at the opponents. Only with the right approach, you can lead your troops to victory. All battles are mainly connected to World War II. Amazing maps are available, which is also a great feature of the game. Even though you can play the game offline, it’s better when you play it connected to the internet. Also, the fantastic thing about the game is the possibility of replaying the game and watching your moves.

John Tiller Software includes four games that are related to Arab-Islamic wars. The game is real, and while you play it, you will also learn about the topic, and this is a great feature. The games that are included are Fulda Gap ’85, Quang Tri ’72, North German Plain ’85, and Mideast ’67.

The game is a fantastic war game, which also contains some strategic details. The fantastic thing is that you connect to players from all around the world. Also, you can chat with them in real-time. Also, it’s available in 32 languages. Like any other war game, you will have to win a lot of battles. In the game, you have the goal of becoming a king. It’s a great thing that you can customize and build buildings during the wars.

The theme of this game is the American Civil War and represents a fantastic war game.  The goal is to win int the battles and to provide your team a victory. The Multiplayer mode is available, which is an excellent feature because you can hang out with your friends while you play the game.

As you can see from the list above, war games have unusual historical topics, which means that during the fun, you can find out a lot of information. We hope that our list will help you to make the right decision. Enjoy the playing, and have fun!