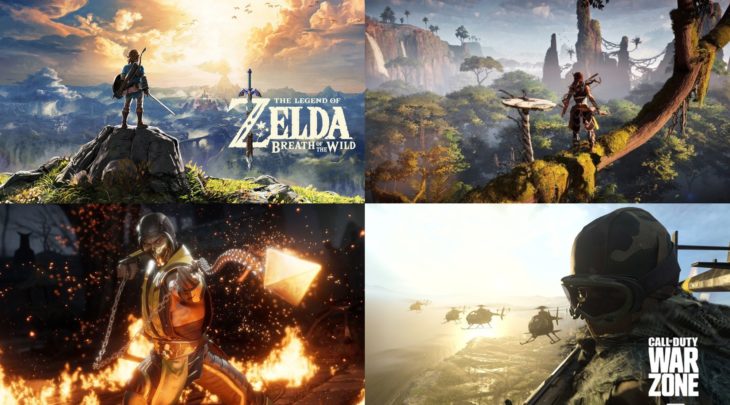 We live in a technologically driven era, which means that a lot of things have improved in the gaming industry in the last several years. Nowadays, worldwide gaming corporations are a part of the multi-billion dollar enterprise with several of their popular genres and games being the largest revenue generators. But, what are the most loved ones? Now, if you are thinking about trying at least one of them, the list in the article below might be quite helpful for you. Let’s take a closer look at the list:

This beloved type appeared at the very beginning of the realm of gaming, which makes it quite normal that it still continues to be the most beloved and played ones all over the globe. Just as physical sports, they simulated by you leading your own team and by the computer or other player controlling the team you are playing against. The most sold franchise ever is FIFA that currently holds a record for selling approximately 3.5 million copies of its 12th part during the first seven days of its initial release.

RPGs are extremely visually appealing and they allow people to control their own characters that then set on an adventure in an open-world. For people who enjoy gathering ingredients, looting caves, exploring a map, and battling a wide range of enemies, this style is perfect for you. You should know that there are various sub-classes including online, strategy, action, and adventure ones like The Elder Scrolls franchise, the new Red Dead Redemption 2, God of War, and so on.

Action games are, in fact, the oldest and most famous classes to date. Video games coming from this class usually require players to use their reflexes, hand-eye coordination, as well as to respond quickly to the things happening in front of them. You should know that the developers behind these stories played around quite a lot with them, hence, they now incorporate different features. Some of the most popular ones you can try some including Spore, Dark Souls, Sekiro, and so on.

The very first thing that you should know about this class is that it is relatively new, nonetheless, it has completely taken the globe by storm in just several years. You have definitely heard about the most played ones including Fortnite and PUBG that generate several billion dollars every year! One of the main advantages of choosing this class is that they can be played on smartphones – which, let’s be honest, everyone carries nowadays.

There is no other type that sells as quickly as a real-time strategy. Basically, these are categorized by 2 types including RTS which is a real-time strategy, and TBS which stands for turn-based strategy. If you love this game, then you must be familiar with the all-time favorite, League of Legends or as it is more commonly referred to LoL. Now, you should know that it can be a bit difficult for a beginner, which is why you might want to play with a pro. If you are interested in League of Legends coaching services, check this website out.

This type is a combination of both action and adventure classes, one that has perfectly developed back in the times when the 8-bit Nintendo was a popular console for players globally. And when they released The Legend of Zelda, it has never stopped being popular. What a lot of people love is that it combines several game styles including puzzle-solving, resource collecting, exploring the maps, and so on.

When you take a look back, fighting games have kept gaming alive several times. This class has brought us incredible franchises that we will always love including Tekken, the always interesting Mortal Combat, and of course, the all-time favorite Street Fighter. This type is definitely not going anywhere and since it is constantly being improved and evolved, an increasing number of people chose to start playing the games coming from the combat genre.

Besides the sports class, adventure is also one of the oldest genres in the gaming world. They go back to the ‘70s when the first Colossal Cave came out – and although a lot of people think that they are dying out, that is not entirely true. Adventure games are still largely developed and bough in approximately the same amount as they did before. You can find adventure elements in other categories as well, especially in the RPG world.

As the name states, this genre is created to simulate real-world, real people, and real activities. When it comes to the ones you can choose to play, the most obvious and loved one is, of course, The Sims. This game allows you to create your own characters, you can build them a home, and you can make them do all the activities a real human would. Additionally, there are also games that allow you to build entire cities – and if you are one of those people who really enjoy building stuff, you can try Sim City.

This genre got its name from the games that allowed us to get a front-row seat to the action happening. Instead of looking at your character running, doing what you command them to, and fighting whomever you want to, they allow us to actually become the character. Pastimes such as Call of Duty or Half-Life allowed us to feel like we are in the story, finishing all the quests and following the plot that requires us to battle a lot of enemies with our chosen weapon.

As you can see, there is a wide range of video game genres that you can choose to try. Of course, the genres mentioned above are only some, of thousands available, but, for the sake of this article, we chose to list only the most loved and popular ones. So, now that you know what you can try, do not waste any more time. Instead, do a little digging on the genres and games, and start killing your time with some most appealing storylines ever.