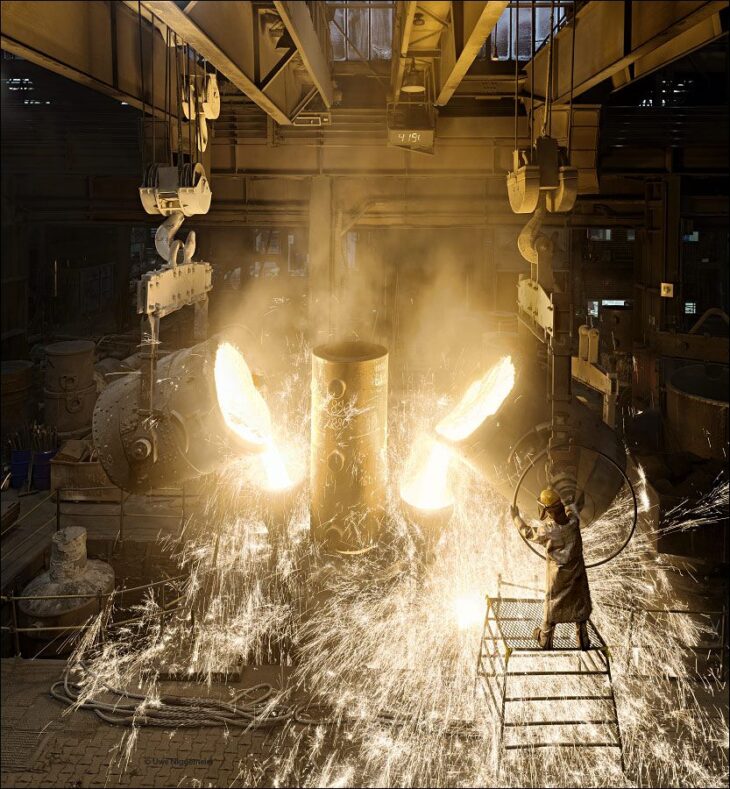 The United States economy is considered to be the strongest in the world with a GDP of 20 trillion dollars. But, China is slowly gaining traction and has solidified the number two spot on the economy ranking list with a GDP of 15.5 trillion dollars. The Chinese economy is constantly on a rise mostly because of its manufacturing capabilities in many, if not all industries. China is especially dominating in the steel casting industry. But, are they the true leaders in this industry? That is what most people want to know.

The short and easy answer to this question is yes. China’s steel production is around 1000 million metric tons every year. The second-largest manufacturer in India is “only” 100 million metric tons. In other words, the Chinese are producing at least ten times more than all the other competitors.

However, quantity is not everything, right? There are so many different factors that need to be considered when deciding a leader.

To come up with a long and conclusive answer backed by evidence, I decided to do a bit of research and write this article.

To come up to any kind of conclusion, we first have to go through all the other competitors that are on-par with the Chinese. Even though I did mention previously that when it comes to quantity, China is well ahead of the competition. Nevertheless, let’s get into it.

India has quite an impressive portfolio when it comes to iron production and steel casting which is why it currently holds the place for the second top producer in the world. Although, it is important to notice that India acquired the number two spot back in 2019. Before that, Japan held that rank.

The immense growth of this industry in India is probably closely correlated to the very high population of 1.35 billion. More people equals more demand which ultimately leads to higher supply. Of course, there are tons of other factors that come into play. But, considering China’s almost equally high population and increase in the supply of steel, logically, the population of the country is quite a big factor.

However, even with India’s massive production of over 100 million tons of steel every year, the demand for their product is quite low. The country exports only 16 MT yearly which is quite low in comparison to some other countries. Belgium, Turkey, Italy, Germany, Russia, and even South Korea have higher export in this industry.

This could be a sign that the quality of the product coming out of India isn’t exactly impressive. Importers prefer relying on more reliable sources such as Japan, Germany, or China.

With the information above in mind, it makes sense that India cannot take the lead in the industry which is why we need to delve into the quantity and quality of Chinese steel.

What was once just another country on the map, today it’s considered to be one of the world’s strongest nations. This is all thanks to the incredibly rapid improvements of the country’s economy and infrastructure. In just a few decades, China quickly opened up manufacturing, import, and export of all kinds of products. This nation is now a machine that constantly pumps out a ridiculously high quantity of products.

One of its leading industries is steel casting. Currently, it’s several dozen times ahead of other countries such as Germany, Italy, South Korea, Japan, etc. Producing a thousand million tons of this material every year. And, considering that steel is needed everywhere in the world for buildings, infrastructure, airplanes, machines, cars, ships, and almost everything else, China can easily deliver.

The export rate is about 75 MT per year. That is several times higher than that of India. Almost double of Japan’s total export, a nation that is currently the second top exporter.

What does all of this information tell us? Well, it shows us that China does not just produce quantity, but it also delivers quality. With such a high rate of export, we can assume that many countries around the world are looking for their steel. And, considering the huge supply, the Chinese can always satisfy the demand.

So, yes, the largest manufacturer of steel in the world is definitely the leader in the industry.

How China became the largest manufacturer?

If we go back 30 years, back to 1990, the ranking lists were quite not much different than what they are today, except for the fact that the Chinese were way behind. Producing only 66 MT of steel per year which was lower than the supply of the United States, Japan, and the Soviet Union (now Russia).

So, how exactly did the Chinese manage to advance this industry in such a short amount of time? To increase the output by 20 times in 30 years is ridiculously fast.

Well, one of the reasons why the nation was so behind was because they lacked proper industrial research. Every industrial aspect was never optimized for efficiency.  This lack of technology hindered the performance of the entire country.

Fortunately, after China and the US settled their diplomatic relations, the country acquired access to the technology, research, and understanding it lacked.

This resulted in all kinds of technological improvements. Switching to a renewable and cleaner source of energy such as gas and solar. Upgrading their tools, bringing in electric power equipment, and importing thousands of machines for transportation as suggested by dawangcasting.com.

With all of these additions to the steel manufacturing industry, China was finally on-par with the US, Japan, and other well-developed countries. But, thanks to the immense workforce available, the Chinese managed to quickly grow the industry in something a lot more.

In the year 2000, the country already took a huge leap forward and acquired the number one rank of the market. Two decades later and the Chinese are still holding that number one spot, making them the clear leader in the steel casting industry.

Of course, there are several other countries with impressive steel casting performance, but the number one spot is definitely reserved for China.