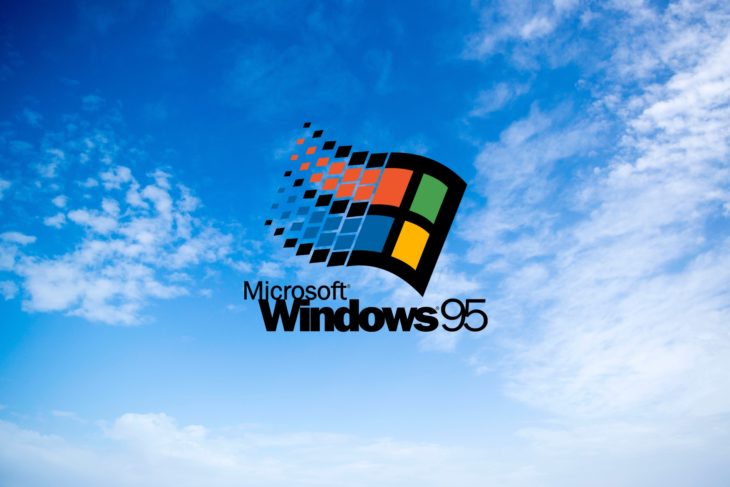 When it comes to operating systems, there is no doubt that Windows is currently leading OS in the world and number of computers are powered by some version such as XP, Windows 7, or currently the latest Windows 10. Each of these three previously listed is excellent in some ways and significantly has contributed to more efficient and fast work on personal computers. However, long before the launching of version 7, 8, or 10, an operating system appeared on the market that somehow triggered a revolution in the world of these softwares.

Launch of the famous Windows 95 in 1995 changed the way we used to use computers. The team of people who worked on the design and programming of this system did an incredible job because the changes Windows 95 brought to users were huge. It can also be said that this was the largest OS update in history.

The way it was presented was also incredible, with commercials, fun and dancing with one of the most iconic songs used in the computer world-Rolling Stones’ “Start Me Up.” However, why has Windows 95 been so revolutionary and why is it considered to be a turning point in OS development by many users and experts? We’ll try to make it clear in the following text and introduce you some interesting facts about this iconic OS.

Shut down with Start button

Probably the most interesting thing presented to users was the Start button, which was the main reason for signing a contract with the Rolling Stones about the rights to use their song. In addition, Windows introduced several other features without which working on today’s computers would be unimaginable. In addition to the Start menu, Taskbar was introduced in the year of 1995, allowing you to see all open programs and apps. Of course, we must not forget the very improved navigation, which was fully customized and easy to use.

Windows as a gaming platform

Quite simply, the Start button and Taskbar have undoubtedly changed the history of computers and operating systems, but also the way we have worked and used computers before. In addition to these enhancements, Windows 95 laid the foundations of gaming in some ways because it was actually a platform where you could play games. It can be said that the reputation of this OS as a great gaming platform began to grow with the advent of Windows 95. The operating system even had some games installed, and it was also possible to add some new ones.

Also, DirectX has become one of the most significant add-ons Microsoft has ever built into its OS. Although everything seems simple and easy, it took a long time to make everything work properly and in the right way. However, even it took much effort to make it possible to play games, in 1995 a revolution was launched and Windows 95 laid the base for further development of Windows OS as the gaming platform as we know it today. Of course, today we have Steam, which has greatly helped to improve gaming on computers powered by Windows OS, but bringing this segment in Windows 95 was really invaluable to this company. Although gaming consoles were undoubtedly dominated on the market at the time, this OS laid the very important foundations for gaming, which is undoubtedly one of the fastest-growing industries today that makes huge profits.

Also, today it’s hard to imagine working on a computer without internet access. However, while it can now be done in a few clicks, Windows 95 was actually the first operating system to make accessing the internet very easy. For example, in previous versions of OS such as Windows 3.11, surfing was not as easy as after launching Windows 95.

In addition, the Plug and Play feature was then introduced, which was intended to easily add hardware components. For example, when connecting a component, the computer itself recognized the compatibility and installed the appropriate software, which made life much easier. Also, the process could be done manually by installing the driver from the disk. Of course, we must not forget the data syncing that was then possible to do with the Briefcase. The thing that most users do with Dropbox or OneDrive today, has its roots in one of the most advanced OS ever.

Lastly, we can say that Windows 95 was the real operating system that was the basis for all the versions that Microsoft introduced after it, and was an incredibly big improvement overall its predecessors. First of all, it was extremely user-friendly. It was succeeded by Windows 98, and support for 95 was officially discontinued on December 31, 2002.